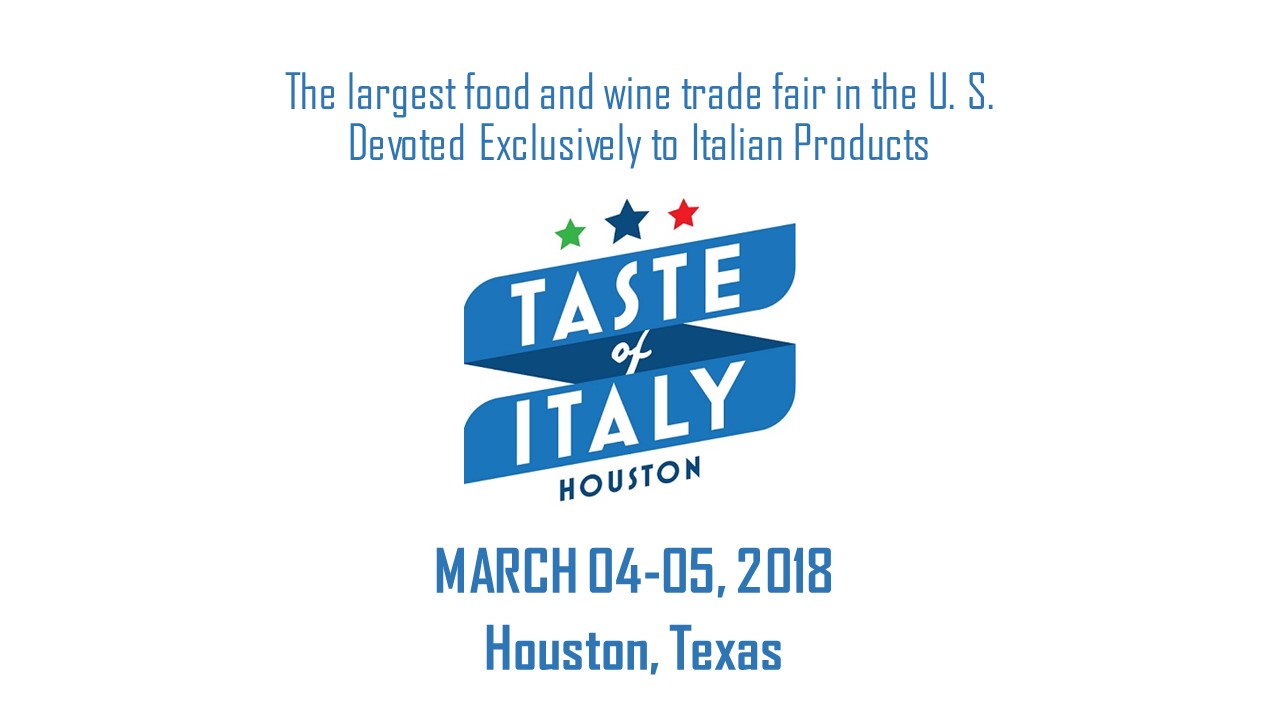 Taste of Italy 2018 will be held MARCH 4-5 in Houston at the Hilton Houston Post Oak & Savor Italy Los Angeles MARCH 1-2.

The fourth annual Taste of Italy Houston wine and food fair will be held on Sunday (trade) and Monday (trade, media, and consumers), March 04-05, 2018. And many of the exhibitors will also be presenting their products and meeting with trade members at the Savor Italy event to be held in Los Angeles on March 01-02 (click here for a video from last year’s Savor Italy gathering).

Conceived and organized by the Italy-America Chamber of Commerce Texas, Taste of Italy is the largest food and wine fair in the U.S. devoted exclusively to Italian products and producers. It includes exclusive trade and media events where Italian food and wine producers connect directly with importers, distributors, retailers, and restaurateurs in America’s fastest growing and most important luxury market — Texas.

Watch the Video from 2017 edition!

About Taste of Italy Houston:

The third annual Taste of Italy Houston 2017 (March 5-6) trade fair and festival marked the event’s biggest gathering ever: More than 60 exhibitors came to Texas from Italy last year to attend the show, the largest trade fair devoted exclusively to Italian wine and food in the U.S. And they presented more than 300 authentic Italian food products and wines.

In a marked uptick from the previous year, more than 500 guests attended the fair, including restaurant, food, and wine trade members from Houston, Austin, Dallas, El Paso, and across Texas, as well as other states like Florida, New York, California, Pennsylvania, Michigan, Louisiana.

Last year also marked the first time that the Italian Trade Commission has partnered with the IACC Texas in presenting the event. And also for the first time, Last year’s show featured a guided tasting led by a Vinitaly International Ambassador.

“The local, regional, and national response to the event this year was spectacular,” said Chamber Director Alessia Paolicchi. “Thanks to our outreach to media and to the Texas food and wine community, we were able to promote the many wonderful seminars we’ll be hosting this year. The response from the Texas restaurant and trade community has been extremely rewarding.”

The show was made possible with the support of several business and institutional partners, including the Italian Trade Commission in the United States (New York and Houston offices).